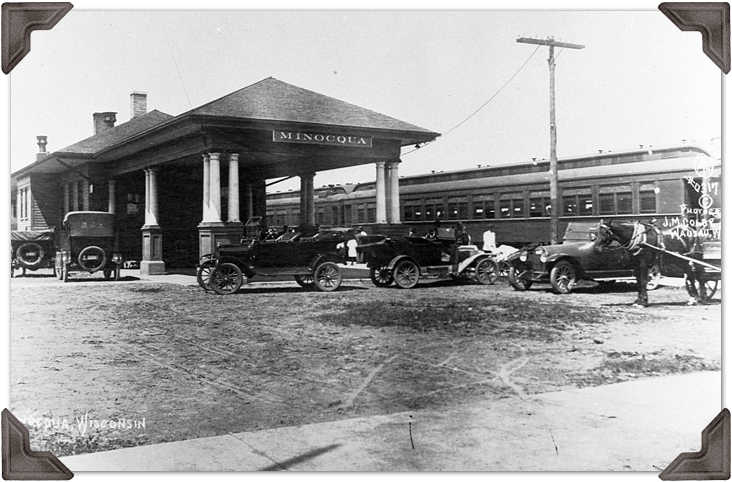 Minocqua, the Island City From 1886 Forward

This lesson in Minocqua’s history begins with the arrival of Gus Nolan in the spring of 1886. He came as a government surveyor to identify and reestablish the eastern boundary of the Lac du Flambeau Indian Reservation. Nolan confirmed that an Indian village had been established along the western shore of the island now called Minocqua.

1887 – Railway service is extended from Merrill to Minocqua.

1889 – The Minocqua dam is constructed. The spring snowmelt was caught the following year.

1890 – Lands that had been included in the federal Rivers and Harbors Act of 1878 were released to homesteading. Subsequently most of the land was sold to logging interests (flood control measure).

1917 – The Minocqua water supply was tested and found to be unsafe.

1921 – A local typhoid fever epidemic was reported. The water was chlorinated with only limited success.

1925 – A new municipal well was finally drilled at its present location along Highway 51 north. This well continues to supply good water to the town. 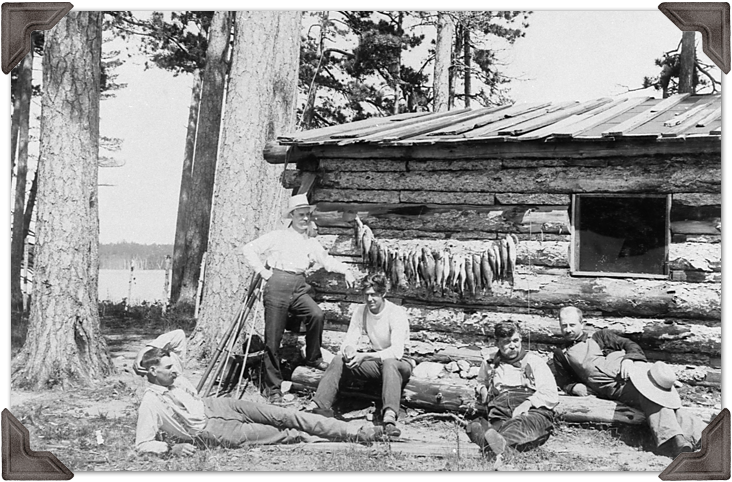 1935 – A sewage treatment facility was built near the south end of the pond where the nutrient laden effluent was discharged into the pond. Lush green algae continues to flourish.

1993 – Storm sewer water from the north portion of the island diverted through a primary filter system.

1994 – Demand for lake frontage on the Minocqua chain continues strong. Vacant lots are a rarity. Older homes and/or cottages are being razed since their lot has greater value than most older structures. 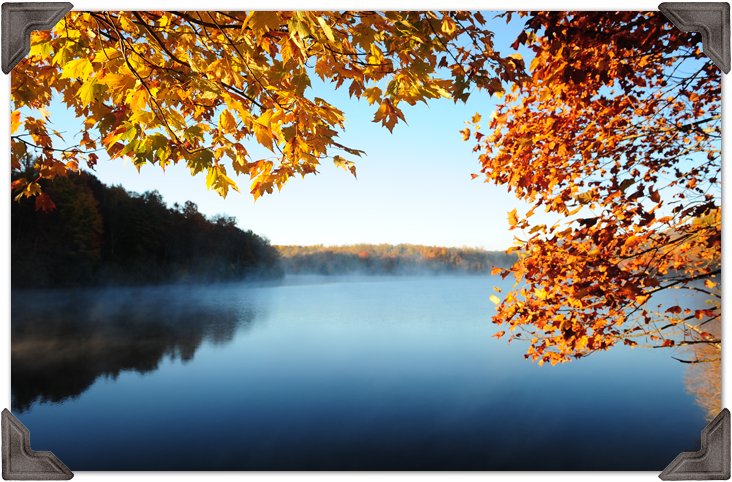 1995 – Approximately 15% of the Minocqua Lake shore lands are serviced by the Lakeland Sanitary District. The majority of homes on the lake have septic systems installed during the 1970’s and 1980’s.

1996 – Minocqua Priority Lakes Project terminated by action of the Minocqua Town Board.

1997 – Dr. Byron Shaw, College of Natural Resources –UW Stevens Point delivers his report; An Evaluation of the Impacts Septic Systems Have on Groundwater and Surface water Quality of Minocqua Lake – Minocqua, Wisconsin. The study focused on 160 homes having private sewage disposal systems. Of these only 82 owners gave permission to conduct the survey on their property. This study was the result of a DNR Lake Planning Grant awarded to the Minocqua/Kawaguesaga Lakes Protection Association.

2001 – The Lakeland Sanitary District is nearing its treatment capacity. A rate increase designed to build a cash reserve for the anticipated plant expansion is already in effect. Property owners on Minocqua Lake must be encouraged to petition to be included in the areas serviced. 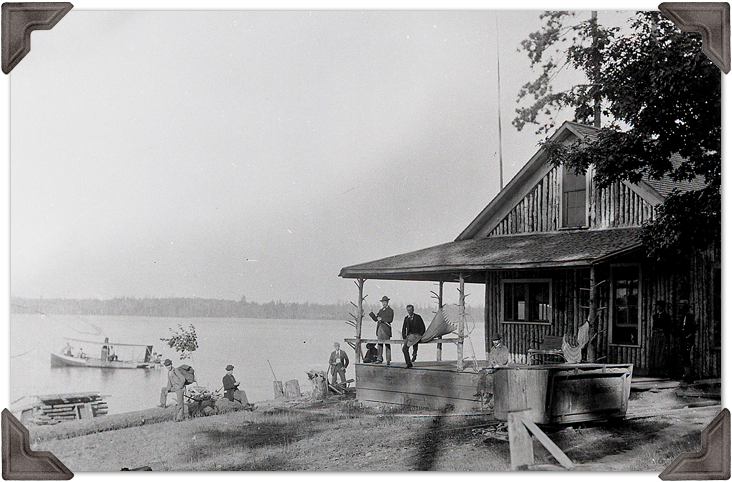 During the first seventeen years following construction of the dam/dike works they washed out five times. Not everyone favored the dam. On June 9, 1898 the wood frame water level control gate was destroyed with a dynamite blast and was not rebuilt for several years. An alert reporter from the Vilas County News filed a story on July 7, 1898 that now, more than a century later allows us to visualize the extent of shore land alterations that had occurred on our Minocqua Chain-of-Lakes. “Hundreds of acres of lake shore, submerged for years, was above water and covered with decaying vegetable matter. The sight is, indeed, a desolate one to behold. Damage to the summer resident property along the beautiful banks and to the businessmen of Minocqua is many thousands of dollars.” (Quote from the Lakeland Times.) 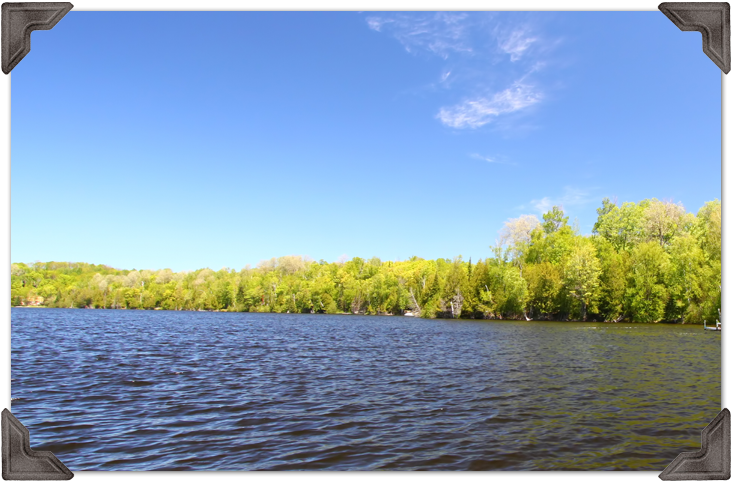 Controversy over restoration of the Minocqua dam continued well into the second summer. Finally, on August 7, 1902, while work was progressing on replacing the dam with one of similar dimensions, an injunction was issued that demanded a five to seven- foot head. Some believed that this was a ploy designed to assure the people that the new dam, at the four-foot elevation, would be safe and not inconvenience residents again.

In 1907 the Wisconsin Valley Improvement Corporation (WVIC) gained control of the Minocqua Dam and its operation as a satellite reservoir. The original Wisconsin River Reservoir System was initiated with a two million dollar private investment. Today the WVIC remains a private corporation owned by the waterpower use industries. The mills and utilities own the stock and fund the operation by paying tolls.

Ten years later, a concrete water control structure was slipped into the same dike several yards to the north. While the record is unclear, there is strong evidence that all or parts of the old wood frame dam were simply buried within the earthen dike beneath new fill material. There is some question whether or not the practice of sealing organic material within an earthen dike work would meet today’s standards. Since the WVIC take-over of the dam operation there have been no accidental failures of either the dam or dike work.

In response to a recent inquiry on the “Aging Wisconsin Dams”, Meg Galloway DNR dam safety engineer stated, “Let me assure you that my statement about the presumption that a dam that had been in existence for one hundred years will always be there is not my belief, but one held by many owners and citizens when told the dam does not meet standards.”

The DNR dam safety engineer shared the following: “Because the Minocqua Dam is part of an extensive system of hydropower dams and storage reservoirs owned by the WVIC its regulation falls under the jurisdiction of the Federal Regulatory Commission (FERK), and not the dam safety program within the DNR. The federal agency FERK inspects dams under its jurisdiction every one to three years, and requires a detailed inspection by an independent consultant every five years.”

The last inspection report is dated September 17, 1999. A registered professional engineer from Chicago conducted it. The dam was classified as a low hazard structure because it has a hydraulic head of only four feet. Based on the FERK report, WVIC’s data and informational inspections, the Minocqua dam is considered safe. 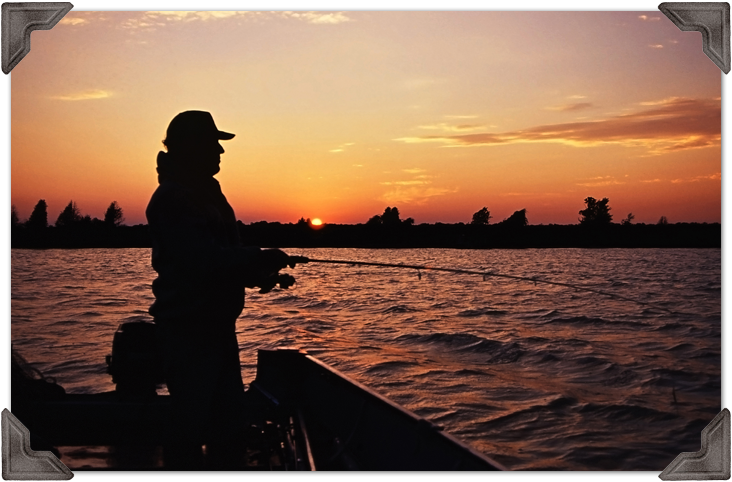